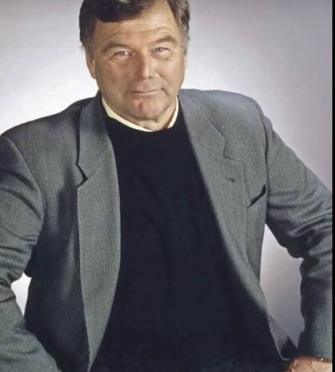 I was minding my own business on YouTube a couple weeks ago and saw in the comments of this video, they were not sure who the voice over was…

END_OF_DOCUMENT_TOKEN_TO_BE_REPLACED

The WABC-TV people are really intune to their audience. the Eyewitness News theme package – with this update going as far back as 22 years ago, still sounds great. it was one of Frank Gari’s last major fingerprint in a theme package. Very Northeast. Very New York. Anything that has pop, rock or teeny bopper sounds would never fly. Leave it to the California Disney cluster to play out.

Around 2012, WABC-TV was next station in the Disney/ABC group to go to automation, at the time using Grass Valley’s Ignite as WPVI in Philly had began a workflow in 2008/09 when they built their new facility at the time. This means the “control room” is really controlled by a Windows PC, and its mostly dependent on scripting out the litteral aspects of news production and the timing. I landed across a video earlier today indicating that this workflow was completely scrapped just going to another vendor, Ross.

How Jimmy Kimmel Live  would appear on TVs across the NY Tristate area, was the last block to Eyewitness News at exactly 11:34:20*, the Vizrt CG, would display the NYS Lottery numbers, for roughly 20 seconds, call up Camera 2 (we’ll call it that for the center camera) for a few seconds, open up Bill and Sade’s mic, then automatically switch to the city cam zooming out of WABC-TV’s streetside studio, fade to black, then have the off site Master Control handoff to the network.

*because the closing cut to the theme runs at minute-four, and if you subtract the end to where it starts… you can see how you can script this very well.

I suspect this was a Timed Macro Event or TME that is cued into the then Ignite system they had. The Technical Director would ensure they would press the butt at 11:34:20 so it could play out properly so it could transition to Jimmy Kimmel seamlessly.

This close despite having a sample cut on my iOS devices, and sure the anchors talk near the end… the idea of running 40 seconds of theme music every night and the close has a static sequence that doesn’t fail, and this YouTube was from 2012, and seeing the very same sequence of TMEs in 2017 when I stayed in Manhattan that fall, is pretty damn good.

If stations could allow some number of braintrust, maybe automation wouldn’t look so bad… yes I am talking to you WCVB-TV off 128! 😀 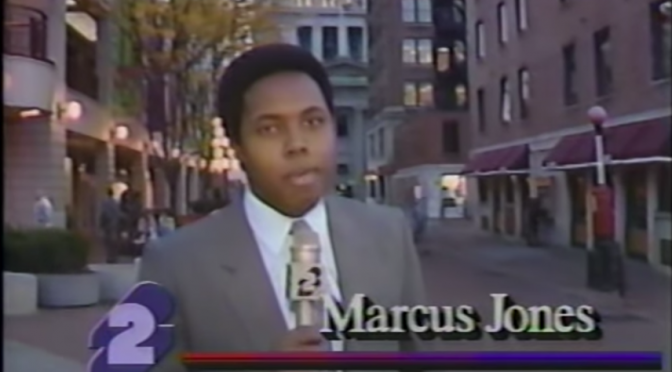 But I have access to my MacBook and YouTube, and one overnight where I didn’t get sleep, I did a literal search for some of the on camera people of WGBH’s Ten O’ Clock News. In fact some of the earlier embeds was from a YouTube channel I ran into, and it turns out that same YouTube channel is Marcus Jones… After a quick verification and a gratitude of your humble news gathering hobbyist, he left a lengthy reply last Wednesday after your’s truly asked about his professional whereabouts… so below is his reply (some is edited for formatting and for ease of reading).

Dear Steven…For about a year after the cancellation of the TOCN, I worked part-time editing show open videos for “The Group” on WGBH-TV. “The Group” filled in for the TOCN for awhile before “Greater Boston” came along. In August of 1992, I began a 2-year run as anchor and news director of Lowell Cable Television’s nightly “NewsCenter 6” cablecast. I also did freelance reporting for FOX 25, New England Cable News, and WBZ-TV’s “Eyewitness News” from 1993 to 1995. For a brief period in late 1994, I even did fill-in lecturing in broadcast journalism classes at Northeastern University. In May of 1995, I moved to the Washington, DC area to become the main weekday reporter covering the District for Newschannel 8.

Through the years, since relocating to the National Capital Area, I’ve done various freelance reporting, videography, and video editing for smaller county cable operations and for my own projects.

As my young son progressed through the public school system in Prince William County, Virginia, I transitioned into the field of administrative support, as well. For more than a decade, I served vice presidents, executive directors, even the town treasurer, in roles such as executive assistant, special assistant and deputy. With what little spare time I had during this period, I also mentored and instructed aspiring high school journalists from 1996 to 2008 through the Urban Journalism Workshop program sponsored by the Washington Association of Black Journalists. I’m pleased and proud to say several of those young people are now working journalists in markets throughout the country. In 2004, I contributed to the “The Tom Joyner Morning (Radio) Show” as a DC correspondent for BlackAmericaWeb.com. In 2010, I added webmaster to my quiver when I launched an affinity site featuring classmates from my generation at Boston University. The site has been the catalyst for numerous reunions and other alumni events and activities.

In 2012, I became, and remain, an active YouTube Content Creator. My most popular channel is VideoCollectables. The channel has more than 230 news, event and human interest videos available (many more to come), collectively more than 103 million content views, currently 150,000 channel subscribers, and growing, and an audience which includes every continent and notable island nation on the planet. VideoCollectables is highly rated by SocialBlade.com and tracked as an influencer channel by Noxinfluencer.com.

But, enough about me, your message reminded me of a significant upcoming anniversary. I have mentioned to some of my colleagues from the TOCN, we should cobble together a video memoir reflecting on our experiences with the TOCN. I haven’t given up on the notion – which is why I fully endorse and encourage your project to memorialize what all of us, to a man and a woman, agree was the best news job we ever had.

I actually frame this as one of my most obsessive subjects that I don’t have an answer to. How in the hell could one of public media’s most respective personalities be friends with one of the most trashiest people on the AM band of area radio? Also why is there no video airchecks of Howie Carr as a reporter at WNEV (pre WHDH Ch 7), WGBH or heck even WLVI? I don’t believe in conspiracy theories, but I suspected the way Howie Carr has been a populist-conservative sell-out since late 2014, that his WRKO days (late 90s to late 2014) was more of a stick to be a center-right, and the present days and his days before WRKO was his true self.

END_OF_DOCUMENT_TOKEN_TO_BE_REPLACED

In remembering the ol newscast for a flagship-grade PBS station, WGBH got more competitive in it’s looks department. The station chose TV by Design (TVbD) in Atlanta, and John Christopher Burns was the main artist for the package. In it’s history, this was the lone Chyron/animation package ever to be used, as the late 80s, a computer art; meeting broadcast was becoming more fused.

I am unsure for the lower thirds of the talent if it came off the Chyron Scribe or keyed on still frame on video tape. For all intensive purposes, any type of animations was like CGI meeting a green screen. Typically opens and other elements had a hard color that like a green screen, could be “keyed”. Therefore the open could wipe, blend in to video. Even in the early days of animation PC or Mac apps like After Effects, it had to be transferred to tape to be “rendered”. Stations would have a dedicated tape deck, and with some magic of automation, the tape player would cue up to a certain time code and also loop the video if necessary. This was a standard operating practice up until things could either playout natively or the ability to play out QuickTime video clips straight out of the graphics box. In short CGIs on TV news designed by computers were not played out by very same machines till very recently.

I suspected the lower thirds of talents was in the similar vein, basically a full sized image, with black or green colors canceling out the explicit pixels to show (the letters and graphics), because the “Channel 2” logo was too high of a resolution for a Chyron to handle. While a Chyron for the time could support an internal paint program, the logos or bugs were very low bit in quality – look at WNEVs crappy “Radar 7” logo used for the lower thirds till the Sunbeam buyout by 1993.

At some point between 1988 to it’s May 1991 cancelation, the lower thirds for the reporters featuring the high resolution Channel 2 logo was removed, but the multi color line and name space remained intact.

The animation package will be it’s own post because there’s an interesting connection with the style and looks to Apple Computer, Inc. documentation for the time. 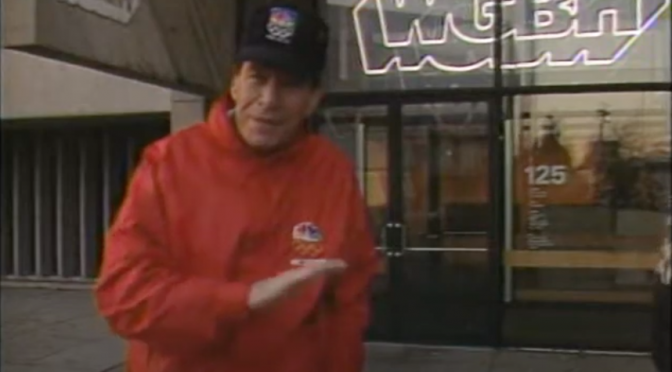 Some Betacam tapes, if played on a Digital Betacam with a Firewire connection that is exposed to a computer application capable of digitization could have the potential to be posted online (like Bill O’Reilly’s tirade closing out an early 1990s Inside Edition that was one of the first viral YouTube videos way back? :))  I love when this happens!

I call these “Insider Clips” typically video that’s shot with the newsroom gear that is shown for the staff, often for people who depart and years go by and it becomes public. I’ve seen this in other stations and on YouTube. While this was shot I was just a year old , inside jokes and jabs are easy to interpret and understand, because most newsrooms have the same challenges and advantages, and workloads.

Anyways, that intro aside, a producer for WGBH’s Ten O’ Clock News was leaving to another career opportunity, so the production team did a 13 minute tape. The production is low-fi in quality – even for 1988 standards, because they didn’t have much graphics outside the Chyron – if there was a Paintbox, it might’ve been for their national shows instead. In one example you see it start with very cheesy WGBH ID (the ones you normally see on the start of a PBS show) without “Boston Presents” it has “HELP” instead.  Another soundbite chopped in was signature sounder for the funding spots for Nova at the time (in the frame where you see the tornado.)  You can tell they were slapping a lot of things quickly, because the rest of the clips are the goodbyes from 3 1/2 minutes in. The sarcasm of David Boreri at that point in was hilarious.

Once upon a time when WGBH was based at 125 Western Avenue in the Allston neighborhood of Boston, the building was really interesting. I did get an opportunity to volunteer there in their last year at the location. I never got a chance to see the front of the building and the infamous WGBH neon logo lit up at the front door. I don’t think this moved to Brighton, and sadly the logo had changed last year.