This feature focuses on two other guys, the ones I know the least.

Premiere dates as far back in the early 1990s, as the GUI train was at this point accelerating with no stoppage. Premiere developed by SuperMac in 1991, and was acquired by Adobe (the Not Invented or Not Innovated Here is Adobe’s informal tagline.) Trigger warning, I am no fan of Adobe, I find them to be extremely complex, shoplifting the competition and not getting properly accounted in the legal sense (look at the whole brohaha of Photoshop vs. Quantel’s Paintbox in the 90s.) . It’s not to say I use some of their products, because there really isn’t that many other choices. I am not a Creative Cloud customer either.

END_OF_DOCUMENT_TOKEN_TO_BE_REPLACED

I am breaking this subject up in multiple posts to focus on each company, some I know more than others. This one is on Apple

Apple Computer in 1999 introduced an application called Final Cut Pro. It was just ten years before Apple was working with Avid to help them build a non linear editing system that made the CVX600 from Grass Valley, that was basically just a terminal that told tape decks specifically what timecodes to cut up video tape metaphorically – extremely jealous. Well by this point Apple would make Avid not just jealous technically, but even on Avid’s own balance sheet and market share.

Final Cut Pro was initially  supported on the Power Mac G3, the PowerBook G3 (Pismo and Wall Street models)  and likely the iMac DV models that came to market in 2000. The reason being the non iMac/iBook models did not have a minimal graphics processor or video RAM to make it possible to edit beyond basic cutups in iMovie for an example.

FCP was mostly software based. This means the big ol SCSI hard drives or big ol Avid Adrenaline boxes were illrelevant.  That FireWire port that was on your Macintosh was all you needed. If you a DV tape deck, or a camera to ingest into video was the I/O bus.

This is where Avid dropped the ball.

Remember in 1999, the Mac OS 9 (that infamous fragile operating system that morphed from the 9″ black and white monitor with  128K RAM just 15 years before) was released, so FCP predates OS X by a version or two. While FCP had some restrictions compared to Avid or Adobe, this lowered the barrier to entry.

Apple was a pioneer of making non linear formats easy to understand especially with QuickTime vs. MPEG 4, vs. baking it back to tape. Avid to this day is still a bit confusing.

Its not an understatement to say that Final Cut was the editing system for the rest of us™. By the mid 00s, Apple was seriously encroaching Avid’s base which was nearly half of the post production houses, but at the same time, Apple would blow it by 2011 with the introduction of FCPX, but yet Apple didn’t skip a beat, just pissing off long time customers.

FCP’s legacy  UI was a bit quirky, but not as complex as Avid, and for most FCP users, they were using other guys or did other things like graphic design, animations, etc. The dual screen support enabled people to put whatever they wanted, wherever they wanted, and not those silly windows that magically disappears when you least expected. Likewise the GUI skillset was of those who know GUIs inside and out, and there was seperation of what was a keyboard function and what was a mouse.

Like OS X, the “X” was basically demarcing the line of what’s old code (FCP 7 was the last of it’s legacy dating back to 1999, virtually 10 years old.) FCP was basically a fancier iMovie and unfortunately lowed the barrier to entry to what was becoming a growing market of social media content creators who never dealt with video editing, never mind the idea these people didn’t grow up watching broadcast or contemporary cable prior to the mid 00s.

FCP X is really designed for a MacBook and if you have  a MacPro, you’re above the minimal specs, especially if you have a dual screen. The UI is all in one window, if you want to extend it – good luck! The customization is a joke in everything. Apple won’t have to worry about a saturated market.

Any rational Mac fanboy would say that Apple’s better days is behind them, but they have a trillion dollar balance sheet, so it will take a few more screwups to really hit them financially. 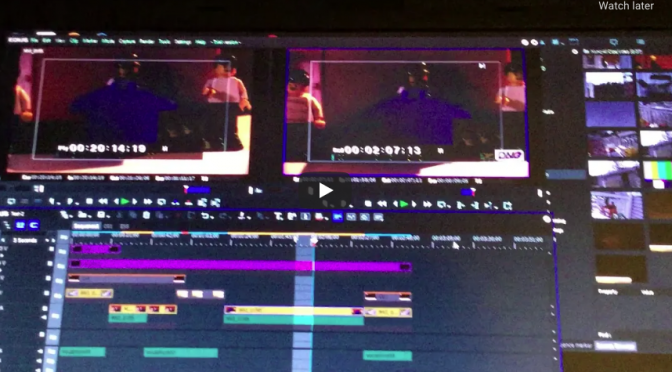 I like to have this site to feature software reviews  like writing up critiques of new records of yester century. If you’re a creative pro that left Apple and Final Cut Pro or you can’t afford a Mac and FCP; take a look at Grass Valley’s Edius 9. This is pretty awesome even for a hobbyist news gatherer shooting minifigs from the field of your back yard! Version 10 (branded as EDIUS X) has rolled out since, but I have not tried out version 10. This was recorded in February.