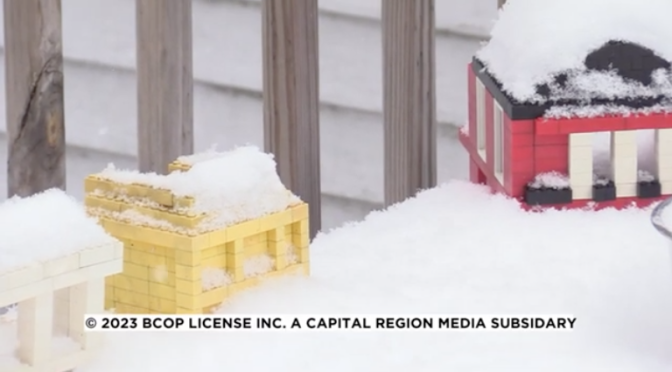 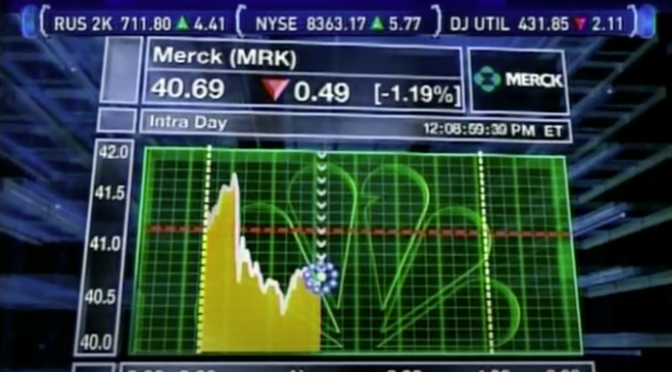 On the week of aprox. December 16th, 2005, CNBC had rolled out a new brand that replaced the fun, flirty, edgy, aggressive package that was used when they relocated from Fort Lee to Englewood Cliffs, N.J. CNBC had been a close tie to Pyburn Films, a motion graphics design firm. They had done promos for CNBC before, and their previous graphics package before they moved. Whoever at CNBC was running promotions, apparently loves blue. Dark blue. Sick blue. Sick Building Syndrome Blue.

Before we go to late 2005 (of which I had watched a lot that first week of it’s new look because I believe I caught the flu, one of two instances before I caught COVID a year ago to the day.)

END_OF_DOCUMENT_TOKEN_TO_BE_REPLACED 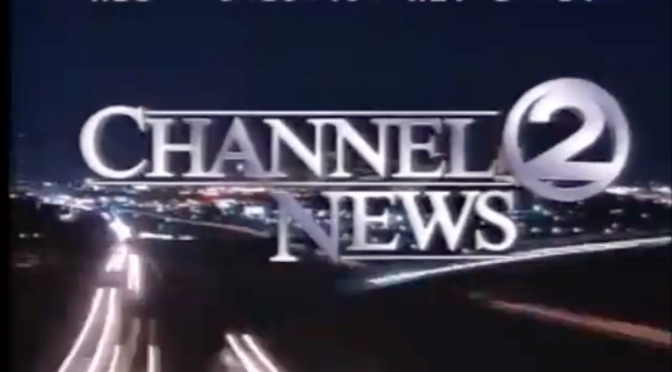 Before the days 615 Music became a juggernaut in the 1990s; before WMAQ-TV’s Newswire. or KGO-TV’s News One, or KPIX’s Battery, or WRAL’s In-Sink, or KCBS/KCAL’s Viacom News Package, there was their allegedly first theme, Let’s Get Involved. Long before the days of newer versions with say a Let’s Get Involved V2; WKRN and 615 Music except for 2 years in almost 40 years had been homies as I tweeted out Sunday night. Other stations in the market had used 615 Music over the years, and 615 Music as of 2022 is just a brand of themes composed before the big merger in the Warner-Chappell’s Production Music division.

WKRN is still using 615 packages, Propulsion has been used since the station did a dramatic rebrand in late 2016. Meanwhile part creator of 615 Music, Randy Watchler and his adult son founded 11/One Music and competing station WSMV had switch to 11/One from 615 Music earlier this year. It’s unclear if WKRN would switch to 11/One given Nexstar tends to be settling with Stephen Arnold Music for any new themes, and any station still using 615 Music/Warner Chappell will probably keep using it. 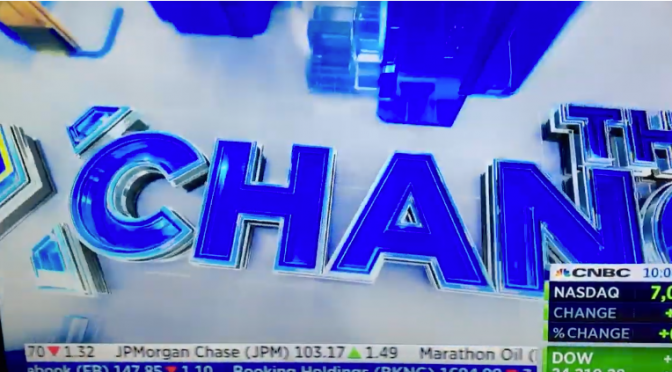 When Kelly Evans moved to do middays, CNBC tweaked their midday shows, to cut Power Lunch down to an hour to 2:00 pm ET and added The Exchange. The program launched in January of 2019. While NewscastStudio has the earliest recording (airing the first week of that month) I was a bit late. I immediately started to record the open again (because of the DVR) because I heard that sound after Sully handed off.

That’s what they in the biz, sonic branding. The musical or auditoral branding that makes you stand out from the competition.

This was obviously the 2003 CNBC theme composed by 615 Music’s then duo Tom Snider and Randy Wachtler. The music had various cuts that were used in various dayparts, obviously this theme was well known for Street Signs, that was on a programming hiatus between February 2002 to late 2003, because Business Center  was still a thing on CNBC after the move to Englewood Cliffs, New Jersey in October of 2003 – of which this theme originated as.

With one view shy of 1,111 total views, with 6 likes, and a few comments, the people who had seen my lo-fi capture are not your modern average CNBC viewers, they are loyalists and probably have shared similar sentiments of the direction the CNBC branding, imaging has gone. Dark. Modern. Post realistic. Even if you argue CNBC’s move in 2003 was considered modern, it wasn’t departing into abstract hell, it had flash, and energy, of which the 615 theme package captured. Prior to The Exchange, the theme was used from October 2003 to December 2005. Ironically the two succeeding theme packages have outlived any other theme or graphics package times 2 (the Rampage Music NY from December 2005 to October 2014 and the Man Made package from latter date to present, going on 8 years!)

A couple Saturdays ago, I posed a Resync of NewsNation based on various airchecks I had captured from inception to early 2021. The theme package is Stephen Arnold Music, composed exclusively for the network. But it really has a sedating sonic branding. Since News Nation is the former WGN America, the same WGNA that ran WGN-TV’s local news for many years up till aprox 2015, I redid everything with 615 Music’s Chicago’s Very Own – the same sounds that has been heard on their air since mid 2007. The theme has aged well…

BTW: In case you missed the point: Chicago’s Lollapalooza music festival and resync – get it ?

END_OF_DOCUMENT_TOKEN_TO_BE_REPLACED 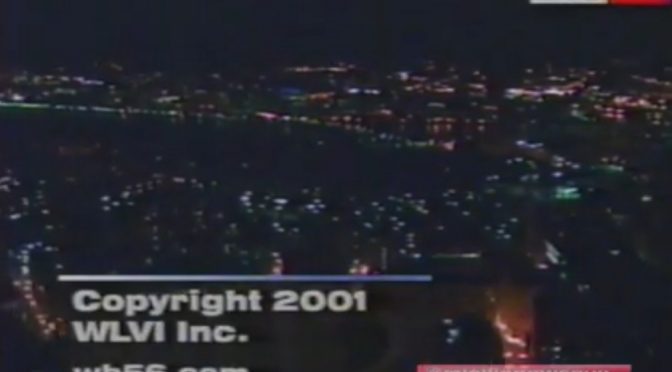 This was a close from November 2001. Actually this was a standard practice to pan the citycam (do you see the old I93 in the sweep?) and run lengthy cuts of their theme. This is when Jeff Barnd had credibility. He soon became a sucker to Sinclair at the flagship WBFF. Leave it at that.

WLVI was also a station that used WMAQ’s original Newswire theme package. I didn’t like it because it was too theatric and filled of drama.

I believe in late 2000, 615 Music actually composed a series of updated cuts. I felt the WLVI versions lived up to it’s title. When 615 Music makes newer cuts for various stations, they added a V and a number, to signify an update. 56 got another update in 2005, just a year and half before the sale to Sunbeam. Those cuts would’ve been V3 to Newswire 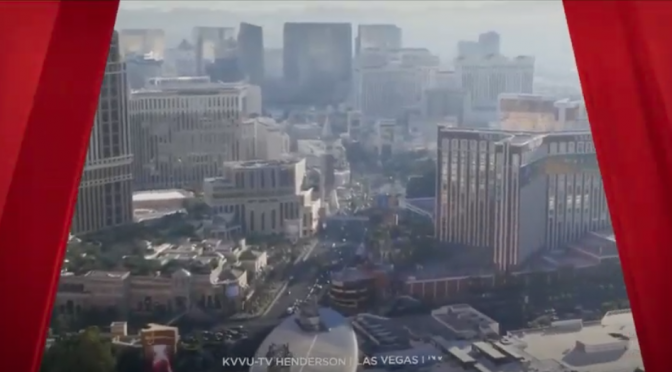 It would make sense, that a news music production company produce some music for a comedic film on 1970s local TV news right?

I did not know this, but 615 Music composed the trailer for Anchorman. This was also the film where many millennials where I once grew up in Londonderry, NH would utter in their graduating class the following year: “Stay Classy Class of 2005”

I counter it with:

Propulsion from 615 Music: aka the theme package that many stations dump prematurely for more inferior sounds. I like the harder newsy cuts over the softer stuff like the open I omit in this URL.

The ol Belo’s KHOU-TV in Houston was their CBS affiliate till 2014, when they were sold off to Gannett (later rebranded as Tegna). Despite the issues at CBS and even within the O&Os, KHOU was one of the stronger affiliates in revenue and ratings.

The long time branding of The Spirit of Texas along with a CBS-look went way by 2006, with some plastic-y looking logos and branding, leading up their HD launch in the 2007 Super Bowl. By 2011, KHOU started take the Texan colors and revolved around a large Lone Star. In early 2011 it resulted in a graphics change. KHOU also acquired Lisa Herrendez from California’s KABC-TV and as a result of new hires, they amped up their on air look formally in August of that year; starting with Len Cannon’s 4:00 show; by October, all newscasts got the updated theme.

From very late 2006 to mid 2011, KHOU’s parent Belo had a deal with 615 Music for corporate wide deal to use any of their musical libraries or compose new packages after the infamous “SESAC Attack of 2006”. KHOU I believe was the first station to commission a theme called Propulsion. For late 2000s, it was standard 615 grunge meets rock. It wasn’t the strongest sound. Until KHOU commissioned a new cut for the package. In fact this became second version, other Belo stations took it within a couple of years. Other stations in other groups like Tribune and alike have used it, sadly with a short time. In the case of KHOU they were the last Gannett station to use the theme up until October of 2014 when the infamous This is Home was required to be used.