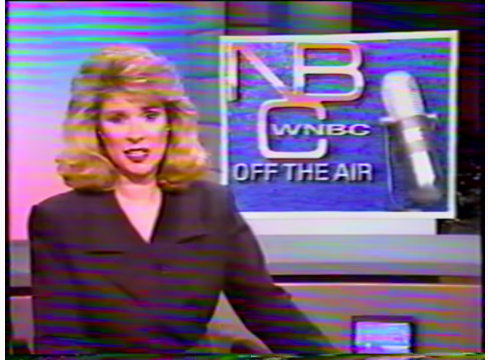 At 5:30 pm Eastern Daylight Time, AM 660, WNBC radio went off the air at 30 Rock, and the signal was then transferred Emmis’ owned WFAN, that was on 1050 for nearly a year. The signal was up for sale, and the deal closed that same day, on October 7th, 1988. The late Alan Colmes, the man who would later keep Sean Hannity from loosing his sanity, was the lucky man to sign off the station, with the utmost class; the last caller “Caroline” apparently won prizes; Colmes kidded that she didn’t “win” the station!

(There is a bunch of footage of TV and radio clips of the station, this post is not going to be exhaustive collection.)

WNBC-TV got lucked out as a package that was done by Roger Grimsby had finished playing as Colmes had finished (yes NOT a typo, and could’ve been one of the few appearances he had done at that station.) Al Roker continued the coverage (way before his Today Show gig) to cover the sign on WFAN as 66. WFAN still exists today at the same position and the same tower on City Island with WCBS 880, dating for decades, so WNBC had shared the same stick and possibly the same day and night coverage as WCBS 880 (known for a number of years as Newsradio 88)

It would be unfair to say that no one should be surprised, but the reality the sale of WNBC radio for a “business decision” (yes that was the language used) though the rumors went as far back as 1985, even when Howard Stern had owned the PM drive time slot. When GE bought RCA, the whole intention was to “get NBC [‘s TV network and stations] for free” so all of RCA’s other assets were sold. That included NBC’s Radio Network (sold the year before) and the 6 or so stations in 1988. Despite the rebrand of the NBC Peacock, the 6 colored feathers represented then 6 divisions. Radio was one of those colored feathers.

The alumni treated it as a death. It was the first time any network would get out of radio. A noose was spotted by a WCBS-TV camera when their crew arrived in the midday drive part; and the late Alan Colmes told Cousin Brucie (also known as Bruce Morrow) that “we’re [based] in the 2nd floor… easier for us to jump out”. You can thank the sociopathic “patriarch of NBC” Bob Wright for that “sale”

Did the sale of NBC Radio…create revenue to build CNBC? Coincidence or something else?

Nearly 2 months later The Wall Street Journal reported in early December 1988 that NBC was exploring business cable… ironically the Financial News Network was approaching 9 years old, but NBC realized the network was struggling.  Sue Herrera became CNBC’s first hire due to reading that same article, no inside talk or telling FNN her secret plans of visiting the East Coast for the first time in her life despite covering Wall Street in Los Angeles for those same years. Nearly 2 years after that, NBC did buy FNN, and mostly their talent that then relocated to New Jersey to have a fused CNBC/FNN format that only lasted for a year following the merger.

The sadistic Self-Wrightous SOB apparently loved people being “bitter” like Cousin Brucie said when WNBC radio died. No wonder why Wright and Donald Trump are besties… they sure feel alike!

It’s also important to know: 1988 was a lousy and hostile year for the peacock ecosystem. You had the fight in Miami settling down between Sunbeam’s WSVN, and they were settling to be a Fox affiliate; radio going dark at 30 Rock; following that 4 month war against CNBC. Mr. I am “Wright” blindsided the local affiliates and thankfully affiliates themselves put pressure to avoid revenues eating into affiliates. NBC hated affiliates because they couldn’t “profit” off of it via reversed revenue streams, and stations not branding enough to NBC’s really over-the-top branding requirements. And Mr. Self-“Wright” was mad that affiliates were pre-empting network programming so often, but never took personal responsibility of loading up the daytime programming with game shows and an oversaturated soap opera market; and squeezing the affiliates from local programming because “access” programs were more profitable.

Ironically, the studio was just another space at 30 Rock in the minds of corporate sociopathic. Wasn’t making NBC enough money… I think I am going to quote former WWOR-TV’s Pat Collins who ended her report with…

“As for the studios; those wonderful studios with all those memories – they will be filled with – computers”

As for doing a live Deathvesary, I will be out of the office today, so I cannot do the same thing I did with NJN and WGBH-TV’s ol Ten O Clock News